Tennis -  A introduction  of the sport. 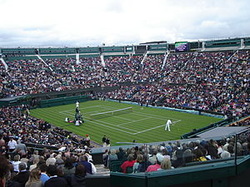 Tennis is a racquet based sport played between two people (singles) or two pairs (doubles)  on a court where they strike a rubber ball over a net to the opponent side of the court.  The aim of the game is too make the opponent fail to hit the ball back over the net and land inside the court. The ball is only allowed to bounce once on your side of the court before a return back to opponent is required.      Tennis was developed in the 2nd half of the 19TH century from other forms of racquet sports including the Basque game of Pelota.  The longest running major tennis tournament is the Wimbledon Championships which first took place in London in 1877.

Players or tea start on different sides of the net and a point is started by a server who hit a serve to the receiver who is diagonal opposite.  The choice of who serves first is usually determined by the toss of a coin.  A legal service is when the server strikes the ball which travels over the net and lands inside the service box diagonally opposite the server. If the ball hits the net and lands in the correct service box, a let is called and serve is deemed void.  If the ball hits the net and does not travel other the other side or fails to land inside the correct the service box, this is a illegal service and results in a fault.  A player has two attempts to hit a legal serve before they lose the point.

A game consists of a sequence of points played with the same player serving. A game is won by the first player (team) to win a minimum of four points and have won two more points than their opponents.  The scoring system  of points in game of tennis  is peculiar and unique to the sport:

If each side has scored three points each i.e. forty apiece, the score is called “Deuce” and once a side is one point ahead after deuce score is called advantage to the side in the lead.  As this means that id they win next point they win the game.  The score is always read with the server’s score first.  A break point occurs when the receiver has the chance to win the game by being victorious in the next point.

A tennis match is usually played as a best of three or five set system.  At the professional level best of three sets matches are the norm with best of five sets system used for the men at the four Grand Slams tournaments, Davis cup and in the final of the Olympics.  The final score in sets is always read with the winning player's score first.

The Major Shots in tennis are the serve, groundstrokes , volleys, drop shots and smashes.  The serve starts of the match  with the player throwing ball up in the air  and striking ball with racquet overhead as this generates more power from the shot.  Groundstrokes are the most common shots in tennis where players allow the ball to bounce before hitting the ball either on their forehand or backhand side depending where the ball has landed on the court.  Volleys are a shot return to the opponent before the ball has bounce generally hit near the net. Players volley as it reduce the reaction time for opponent as ball is return back to the quicker than if ball was allow to bounce.  A drop shot is when a player gentle taps ball over the net so it lands close as possible to net on the opponent side usually employed when opponent deep at the back of the court.  A smash occurs when a player strikes the ball overhead, similar to serve, during a point often in response to a lob by the opponent which is attempt to lift ball over the player who is standing near the net.